Reconstruction of bone defects of the metatarsals, whether resulting from trauma, infection or neoplastic process, can be especially challenging when attempting to maintain an anatomic parabola and biomechancal stability of the forefoot. Amputation is always a possible outcome and should be part of the preoperative discussion with the patient as salvage is often a prolonged process fraught with difficulties. In the appropriate patient step wise operative interventions for salvage attempt can be employed. In this case we describe such technique. [3]

Current surgical treatment options include intercalary bone transport and distraction osteogenesis, vascularized bone transfer, massive cancellous autograft transfer, and synthetic calcium-based fillers. These options may also be augmented with the addition of demineralized bone matrix, allograft, or bone morphogenetic protein (BMP). [1,5,6,7,8] Non-vascularized autografts require a well-perfused recipient site for successful implantation, and there is an inherent potential for resorption with grafts larger than a few centimeters. Vascularized bone grafts have an improved rate of survival in a poorly vascularized bed; nevertheless, graft site morbidity is a potential complication and the operation requires microvascular skills. [9]

More recent surgical treatment option includes autologous bone grafting within induced granulation tissue membranes for management of bone loss. Masquelet et al developed the use of induced membrane assisted massive autograft for segmental bony defects and successfully managed defects ≤25 cm with associated severe soft-tissue injury. [10,11] This 2-stage technique, based on a foreign body reaction triggered by the presence of a PMMA spacer, is a viable option in both aseptic and septic conditions leading to substantial bone loss and requires no advanced skills in microvascular surgery. The segmental bone defect is bridged by a tubularized construct of polymethylmethacrylate, and the bone is stabilized by orthopedic hardware; typically with external fixation. A thin fibrous membrane forms around the PMMA cement spacer within for up to two months ad at that time the cement spacer is removed while preserving the membrane and the contained void is filled with cancellous or cortico-cancellous autograft bone. One of the strengths of this technique is its simplicity, owing to the fact that it does not require special implant resources.[1,9,12]

A 42 year oldmale non-smoker with no significant pastmedical history presented to the Grant Emergency Department following a severe lawn mower injury to the left foot and the primary surgeon (RT) was consulted. The patient was found to have a large degloving type injury along the medial aspect of his left foot from the hallux to the level of the medial malleolus (figure 1). There was exposed bone along the entire medial column with greater than 10cm soft tissue loss consistent with Gustillo-Anderson IIIB, gross contamination with grass, dirt, and gravel within the wound. 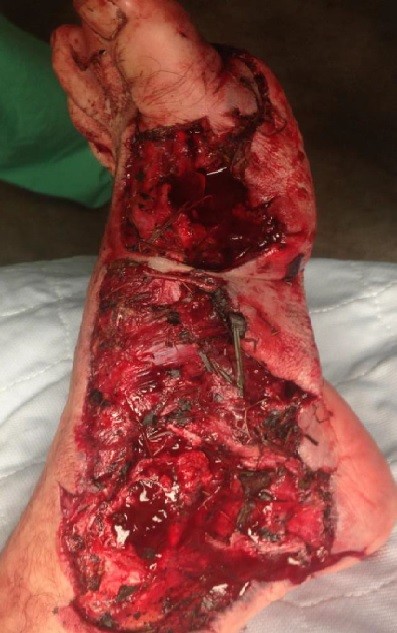 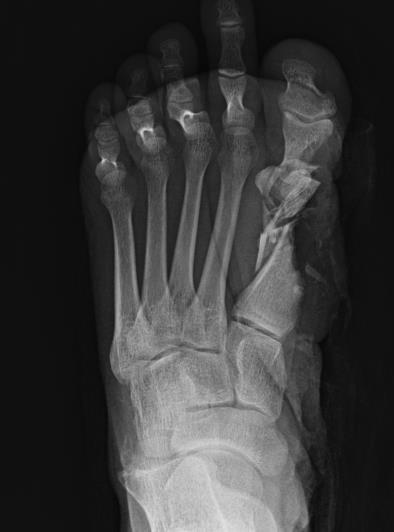 Physical exam revealed palpable dorsalis pedis and posterior tibial arteries. Capillary refill time was less than 3 seconds to all digits with mild dusky discoloration to the plantar arch. The patient's light touch was grossly intact to the level of the digits. Radiographic examination revealed a severely comminuted fracture of the first metatarsal and base of the first proximal phalanx as well as a non-displaced transverse fracture of the medial malleolus (figure 2). The patient received a bedside washout with 1 liter of normal saline, temporary dressing and posterior splint was applied. He was started empirically on Ancef, Gentamicin, and Penicillin per protocol for open fracture management.

The patient was taken to the OR for emergent irrigation, debridement, Masquelet, and stabilization. The posterior tibial tendon, posterior tibial artery, and bone was visible within the wound and noted to be intact. The wound was irrigated with 10 liters of normal saline; 9 liters using gravity lavage and an additional 1 liter with pulse lavage given the level of debris that was present. The 1st metatarsal was comminuted beyond repair. Multiple comminuted devitalized pieces of bone were present and were removed from the wound bed. This left a gap in the first metatarsophalangeal joint which was filled with bone cement combined with 1 gram of vancomycin and 1.2 grams of tobramycin. With the defect filled with an antibiotic cement spacer, the toe was then held out to length using a pin-to-bar external fixator (figure 4,5). The soft tissue was repaired distally, however, a proximal defect remained from the level of the talus to the medial malleolus (figure 3). This aspect of the wound was covered with a non-adherent dressing and a wound vacwas applied. Post-operatively the patient was placed on IV antibiotics and then returned to the OR 3 days later for a second irrigation and debridement of open proximal wound, and a bilayer bovine collagen tissue allograft and wound vac were applied. The patient was discharged with negative pressure therapy. 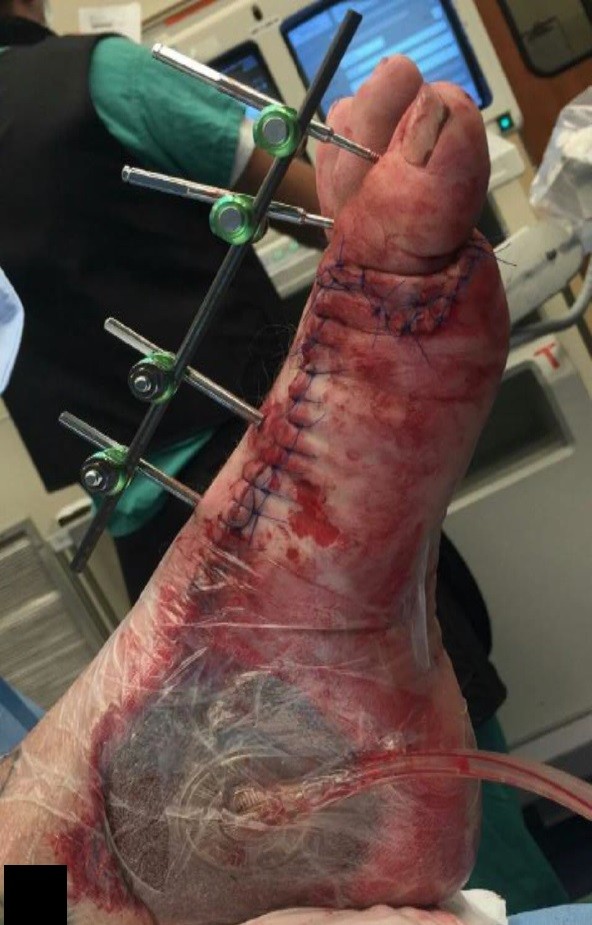 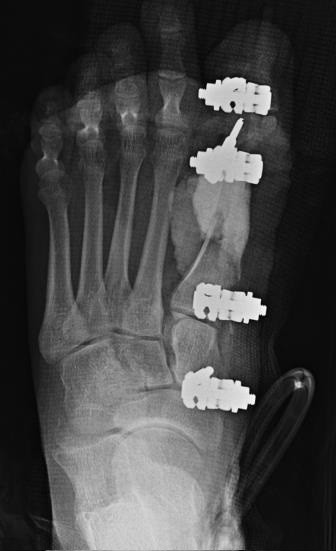 At the 1stMTP joint the Masquelet had taken well and there was noted to be a thick pseudosynovialmembrane around the antibiotic cement spacer. This layer was incised and theantibiotic cement spacer was removed. The deficit was measured to be 4cm x 1.2cm in width. The distal first metatarsal and phalangeal base were prepped with curettes and the void was filled with iliac crest autograft and BMA. The graft was fixated using a dorsal locking plate with corresponding 2.7 and 3.5 locking and non-locking screws (figure 6). At the proximal thigh a split thickness skin graft was harvested. The medial left ankle wound was debrided to healthy bleeding subcutaneous tissue and was measured 6.5cm x 5.5cm with minimal depth. The STSG was secured with nylon suture, covered with a non-adherent dressing, and a wound vac was affixed overlying the graft. The patient was admitted post operatively for pain control. Post-operatively the patient started vitamin D supplementation and a bone stimulator was dispensed with instructions on use. 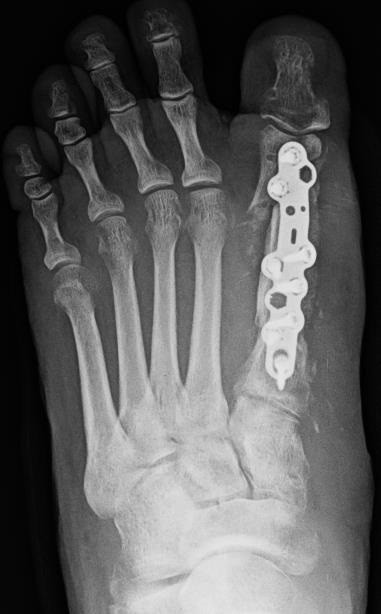 The patient had 100% take of his STSG post-operatively. However, 2 weeks following graft application the patient developed a draining sinus tract to the dorsum of the 1st MTPJ which probed to the level of the plate. The patient was subsequently readmitted to the hospital where tissue cultures were positive for Serratia Marcescens. The infectious disease team was consulted and placed the patient on IV Cefepime. CT imaging at this time revealed a small abscess at the level of the graft. The patient returned to the OR for an incision and drainage with deep cultures performed by the primary surgeon (RT) and antibiotics were continued for 6 weeks.

The sinus tracts continued and repeat CT was performed showing greater than 50% fusion at the proximal aspect of the graft and pseudoarthrosis of the distal aspect of the graft. The patient returned to the OR and all hardware was removed, deep cultures and bone biopsies were obtained (figure 7), and the surgical site was manipulated under anesthesia to assess the union. The first metatarsophalangeal joint was stressed intra-operatively and there was clinically no appreciable motion. All biopsies were found to be negative for osteomyelitis. The patient underwent 30 treatments of hyperbaric oxygen therapy (HBOT) and completely healed the soft tissue (figure 8). Eventual fusion was noted on imaging and the patient returned to ambulation in regular shoe gear with custom orthotics including a Mortons extension. The patient is now greater than one year out from surgery and has returned to pre-injury activities of daily living without restriction including full time work as a tractor trailer driver. 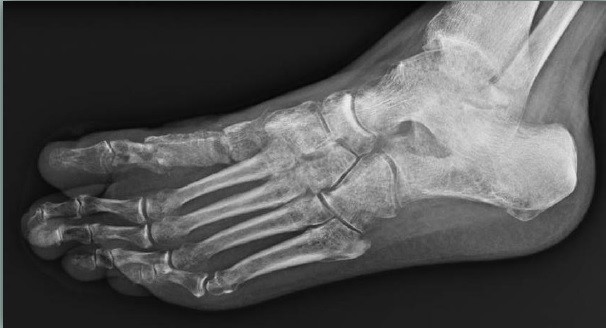 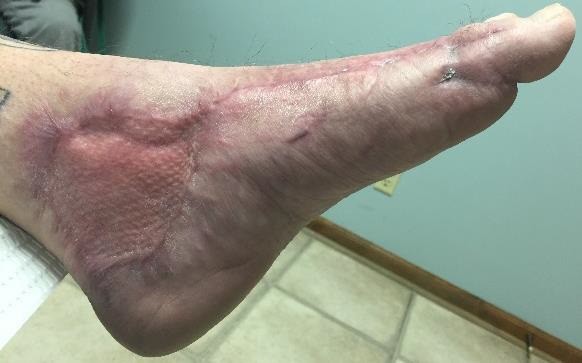 The larger the bone deficit in the metatarsal the greater the surgical reconstruction challenge. However, in the specialty of limb salvage surgery, these can prove to be the most rewarding endeavors. Prior to the development of the Masquelet technique in the 1980’s, the Ilizarov method and vascularized bone transfer were the most frequently performed procedures for correction of large segmental diaphyseal bone defects. The Ilizarov method required great patience and took months for segmental defects, while the vascularized bone grafts were technically difficult and often associated with significant graft resorption.[14] The Masquelet

technique of pseudomembrane formation is novel in that time to correction is independent from the severity or degree of bone lost. Subsequent histologic evaluation studies of the pseudomembrane have shown increased bonestimulating factors and higher concentrations of stem cells compared to matched periosteum. [15,16]

This case presented unique challenges for surgical planning as the inciting traumatic event had resulted in a severely contaminated wound bed and complete loss of the 1st metatarsal phalangeal joint. Joint preservation or reconstruction in this instance was not an option given the severity of the defect. However, in an active, healthy patient who is motivated and compliant salvage remains possible.

The post-operative infection management proved to be the most difficult aspect of the presented case. Our Infectious Disease team was consulted to direct antibiotic care and with the addition of HBOT the patient healed his incision sites and remained free of infection with greater than one year of post-operative follow up. Although typically reserved for long bone segmental deficits, this case shows the potential efficacy of the Masquelet technique in spanning significant bone defects of the metatarsals involving complete loss of the metatarsal phalangeal joint.