A fit and a healthy 34-year-old male carpenter had been referred with a five-year history of chronic ankle pain, following a waterskiing accident, when he was flipped by a wave and came down hard on his right ankle in shallow water. This injury had resulted in ongoing and increasing pain and disability that was preventing him from participating in sports activities and making his vocational duties difficult. At the time of injury, he was taken to his local public hospital where he was treated with a Controlled Ankle Motion (CAM) walker boot and crutches and had been advised to reduce activity for a period of six weeks. His medical history was unremarkable, and he did not report any allergies or sensitivities. Since, the incident he had experienced chronic pain and swelling that has now been impacting his ability to work. He had previously enjoyed middle-distance running, however now had difficulty running short distances. He had trialed various conservative therapies including physical therapy (stretching and mobilisation), ankle bracing, corticosteroid injections and nonprescription orthotics- none of which proffered any discernible improvement to his pain and function.

Clinically, the right ankle displayed global oedema with crepitus and reduced dorsiflexion. The osteophytes were palpable. Plain film radiographs [Table/Fig-1] showed multiple osteophytes within the anterior and posterior aspects of his ankle, with the anterior aspect being symptomatic. Whether to approach the posterior ankle osteophytes concomitantly was discussed between the primary surgeon (MG) and the patient prior to surgery. Given the asymptomatic nature of the posterior ankle pathology, it was agreed that this area would not be approached in this surgical episode, however it may require review at a later date.

The patient was positioned on the operating table in the supine position. Once anaesthesia had been achieved, a pneumatic calf tourniquet was utilised. His right foot and leg was prepared and draped in typical fashion. An ankle block was performed using 0.75% ropivacaine hydrochloride mixed with 1 mL (4 mg) dexamethasone sodium phosphate.

Utilising anatomic dissection and haemostatic principles the ankle was approached via a 30 mm curvilinear incision overlying the anterolateral aspect of the joint approximating the lateral gutter of the ankle [Table/Fig-2] followed by a 10 mm ankle arthrotomy [Table/Fig-3]. Notably several loose fragments effectively “popped” out of the wound once the arthrotomy was performed. Anterior tibial osteophytes were resected [Table/Fig-4] and margination of the damaged cartilage of the talar dome and tibial plafond was performed until smooth joint range of motion with adequate dorsiflexion was achieved. Copious lavage was performed followed by layered closure. A Jones compression bandage with fiberglass back slab was applied and strict non-weight bearing implemented for 10 days postoperatively. 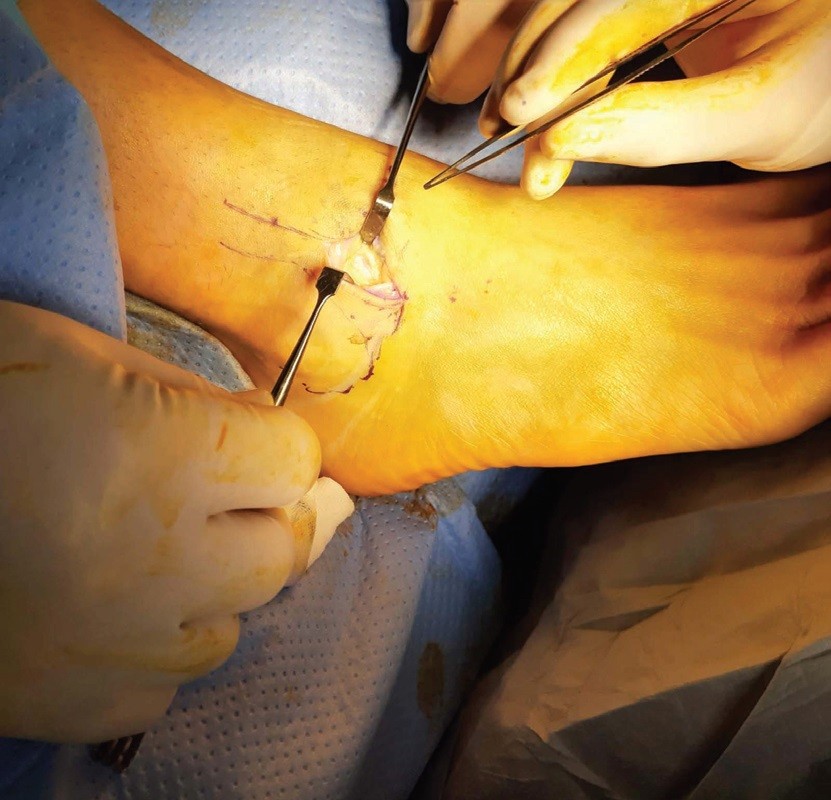 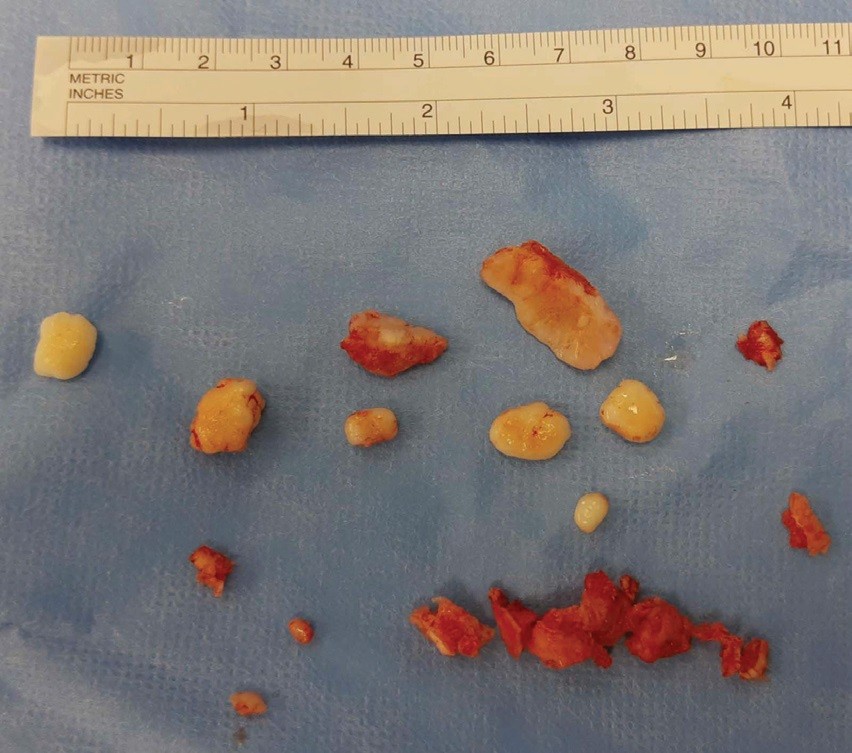 Postoperative radiographs [Table/Fig-5] showed adequate removal of the osteophytes. He was able to achieve 10 degrees of dorsiflexion by his six week review consultation [Table/Fig-6] and was able to participate in 5 km runs at eight weeks postoperatively. 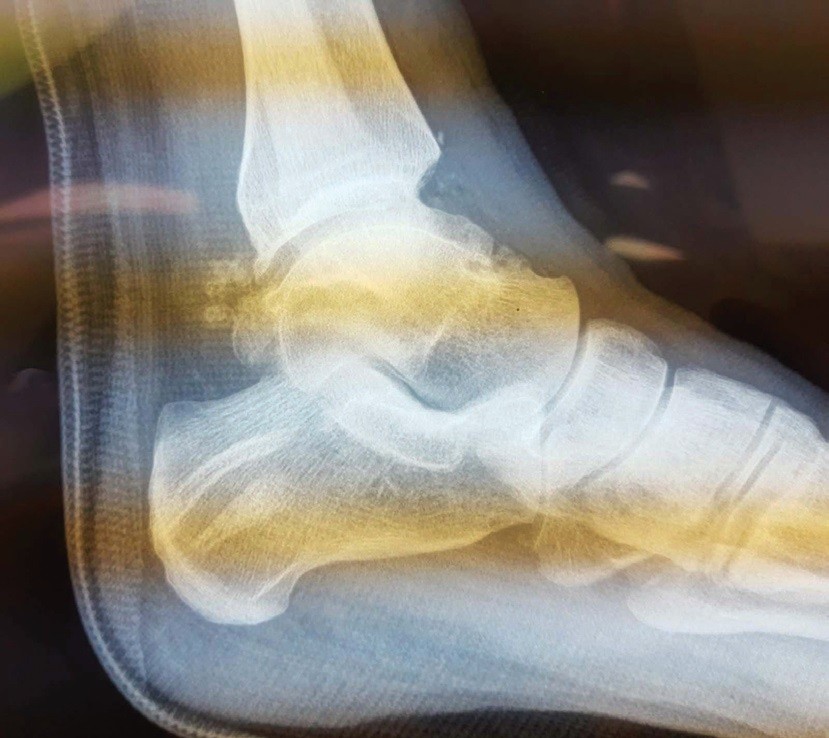 Anterior Ankle Impingement (AAI) refers to the entrapment of the anterior ankle structures upon dorsiflexion, and is usually due to osteophyte or soft-tissue impingement [1]. AAI commonly occurs in athletes, notably soccer players, distance runners or sports requiring sudden acceleration, thus its sobriquet ‘footballer’s ankle’ [2]. AAI is also common in the general population and 91% of patients with AAI report functional limitations and pain [3,4]. Its aetiology is controversial. AAI may occur from repetitive microtrauma or a single traumatic event [5].

Dancers, runners, and soccer players appear predisposed to micro-trauma induced AAI [6]. This follows Wolff’s law of bone reaction to damage, whereby there is a skeletal reaction to repetitive and intermittent injury [5]. A single traumatic event may disrupt the anterior ankle anatomy resulting in soft tissue impingement, floating osteophytes, or other damage [7]. When AAI is chronic it limits ankle function and causes pain due to compression of the synovium and adipose tissue between the talus and ankle mortise [3]. This is increased in the presence of osteophytes, which further limit free range of motion.

Diagnosis is made via clinical and radiographic assessment. Clinically, pain, inflammation and reduced dorsiflexion are exhibited. Palpable spurring may be present. Radiographs are the primary imaging technique for identifying osteophytes at the anterior ankle. Computed Tomography (CT) and Magnetic Resonance Imaging (MRI) may also be useful. MRI is the gold standard for identifying soft-tissue impingement [8-10], although ultrasonography may still allow visualisation of soft tissue impingement lesions and the differentiation of the disease from isolated bone involvement [1]. If pain and limitation to movement is of concern surgical decompression may be performed as a joint sparing procedure. This can be achieved via open or arthroscopic means via medially, laterally, or by both approaches [1].

There is no current consensus for treatment for AAI [5]. The decision to implement treatment is based on multiple factors including pain intensity, functional limitation, and joint osteoarthritis [11]. The aim of treatment is to increase joint function and reduce pain. Nonsurgical management remains the initial approach, with avoidance of provoking activities and increased rest recommended [5]. Conservative treatments for chronic AAI include shoe modifications, heel lifts, and injection therapy [12]. Physical therapy involving joint rehabilitation and muscle strengthening has been shown to be a viable conservative option with research suggesting implementation for up to six months in the case of acute AAI [13].

Surgery is indicated when conservative measures fail [14,15]. The aim of the surgery is to increase the functional ability of the ankle and to reduce pain, and may involve debridement, osteophyte removal, meniscoid lesion excision, partial capsulectomy, and chondroplasty [16]. Complications may include infection, nerve damage, and arthrofibrosis [16]. There are several surgical approaches available for AAI. Both open and arthroscopic techniques have been described and are indicated for the removal of osteophytes in AAI [17,18]. Both of these techniques have their advantages and disadvantages. Open ankle arthroplasty allows direct visualisation of the ankle mortise for easier osteophyte removal and joint repair, with the downside being increased incision size and wound healing required. Arthroscopy provides access to the ankle joint via two small incisions, but may make removal of the osteophytes more difficult [19].

Hawkins RB reported three case reports, approaching the anterior ankle osteophytes in post-traumatic athletic injuries, whilst reshaping the anterior tibia and/or talus to its original contour in order to ensure avoiding impingement of the joint space and abrasion of the adjacent articular cartilage [6]. Performance of punch lesions into osteochondral defects that were incurred at the time of injury in order to allow for the regeneration of fibrocartilage which decreases pain and permits a return to functional and athletic activities was made with each patient reporting a return to normal activities six months after post-surgery.

In a study Branca A et al., treated 133 patients with AAI by way of a tibio-talar arthroscopy. Treatment consisted of the removal of soft tissue adhesions, chondroplasty and the removal of osseous impingements with only four cases reporting a return of impingement 62 months postoperatively. The authors concluded that even in cases with severe cartilage impairment an anterior ankle arthroplasty may play a therapeutic role and can postpone arthrodesis [4].

Recently, Mosca M et al., performed a case series involving 49 patients (50 feet) who underwent this mini-open technique. They found a marked improvement to the preoperative American Orthopaedic Foot and Ankle (AOFAS) scores (47.32) compared to the follow-up score (70.66) and that in the 36-item Short Form Survey (SF-36) there was a statistically significant improvement (p<0.05) in all eight domains. The authors concluded that this miniopen approach may be considered for AAI and that it may be a viable procedure for patients with grade 1 or 2 osteoarthritis who want to delay or prevent arthrodesis or prosthetic ankle replacement in the future [5].

In this report, a mini-open approach to the anterior ankle was performed as a ‘best of both worlds’ approach. Through a miniopen approach, direct visualisation of the anterior ankle remove all osteophytes and impingement was achieved, whilst still retaining a small incision and wound for a quicker recovery time. The mini-open approach involves a smaller arthrotomy of the joint capsule that will presumably have a lower risk of postoperative fibrosis, which may be disabling for young people and active individuals [5]. Future research in this technique involving multiple patients in a variety of settings is recommended to help guide future surgical practice.

This case report involves an AAI treated with a mini-open arthroplasty technique. A mini-open ankle arthroplasty may provide a viable alternative to traditional open techniques and arthroscopy, and may help to delay or prevent future arthrodesis or prosthetic ankle replacement procedures.