In the dorsal incisional approach for Morton’s neuroma, it is required to transect the Deep Transverse Metatarsal ligament (DTML) that lies in the interspace between the 3rd and 4th metatarsal heads. The DTML is an important structure in the stability of the metatarsophalangeal joint (MPJ) as it acts as a tether to bind the metatarsal heads together. Each MPJ has a plantar thickening of the capsule or volar plate to which the DTML can adhere and maintain a transverse arch at the level of the metatarsal heads. Weakening of the DTML can result in various pathologies including: hallux abducto valgus, tailor’s bunion, metatarsus primus varus, and forefoot splay. The purpose of this study is to evaluate the relationship between the transection of the DTML in the 3rd intermetatarsal space as seen with the dorsal incisional approach for Morton’s neuroma excision and the overall effects on the metatarsal alignment.

Ten human cadaveric lower extremity limbs were utilized for this study. Exclusion criteria included: rigid arthritic ankle deformity, history of forefoot/midfoot/rearfoot arthrodesis, severe pes cavus deformity, severe pes plano valgus deformity, pedal amputations, and knee arthroplasty. Inclusion criteria included ankle joint range of motion sufficient to reach rectus positioning. Each limb was mounted to the MTS 858 Mini Bionix biomechanical test system and loaded to 120% of the donor’s documented body weight at a rate of 15 lbf/second in order to simulate peak weight bearing ground reactive forces on the forefoot. (Figure 1) The limb was held at 120% of body weight for 1 minute and then an anterior posterior (AP) radiograph was taken using the X Cel x-ray machine. (Figure 1) The x-ray tube head was angled at 15 degrees cephalic and the central ray was directed at the height of the navicular. The limb was then removed from the MTS and dissection of the 3rd intermetatarsal space was performed with a #15 blade until adequate visualization of the DTML was obtained. The DTML was isolated and completely transected using a #15 blade. (Figure 2) [9,17,18] 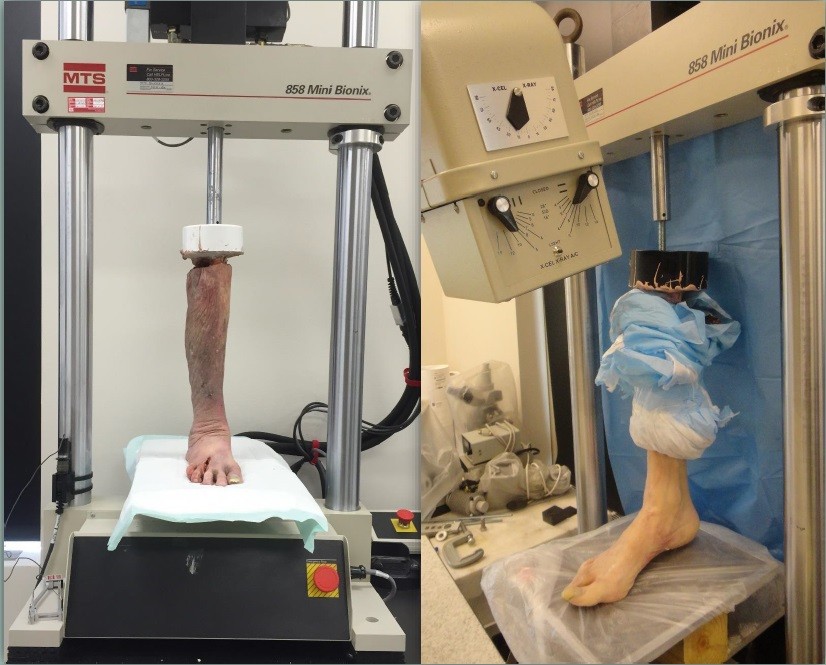 Each limb was again mounted to the MTS biomechanical test system. To simulate peak weight bearing forces, the limb was loaded to 120% of the donor’s weight and an AP radiograph was taken as described above. After the radiograph was obtained, the pre operative and post operative IMA 1-2, IMA 2-3, IMA 3-4, IMA 4-5, IMA 1-4, IMA 2-5 and IMA 3-5 was measured using the Digital Tigerview radiograph viewer to determine the angular relationship in the specimen. Each IMA was measured via the following technique: points were plotted at the medial and lateral cortex of the distal and proximal extent of the diaphyseal shaft of the metatarsal. A bisection of the line connecting distal and proximal plots was used. (Figure 3) 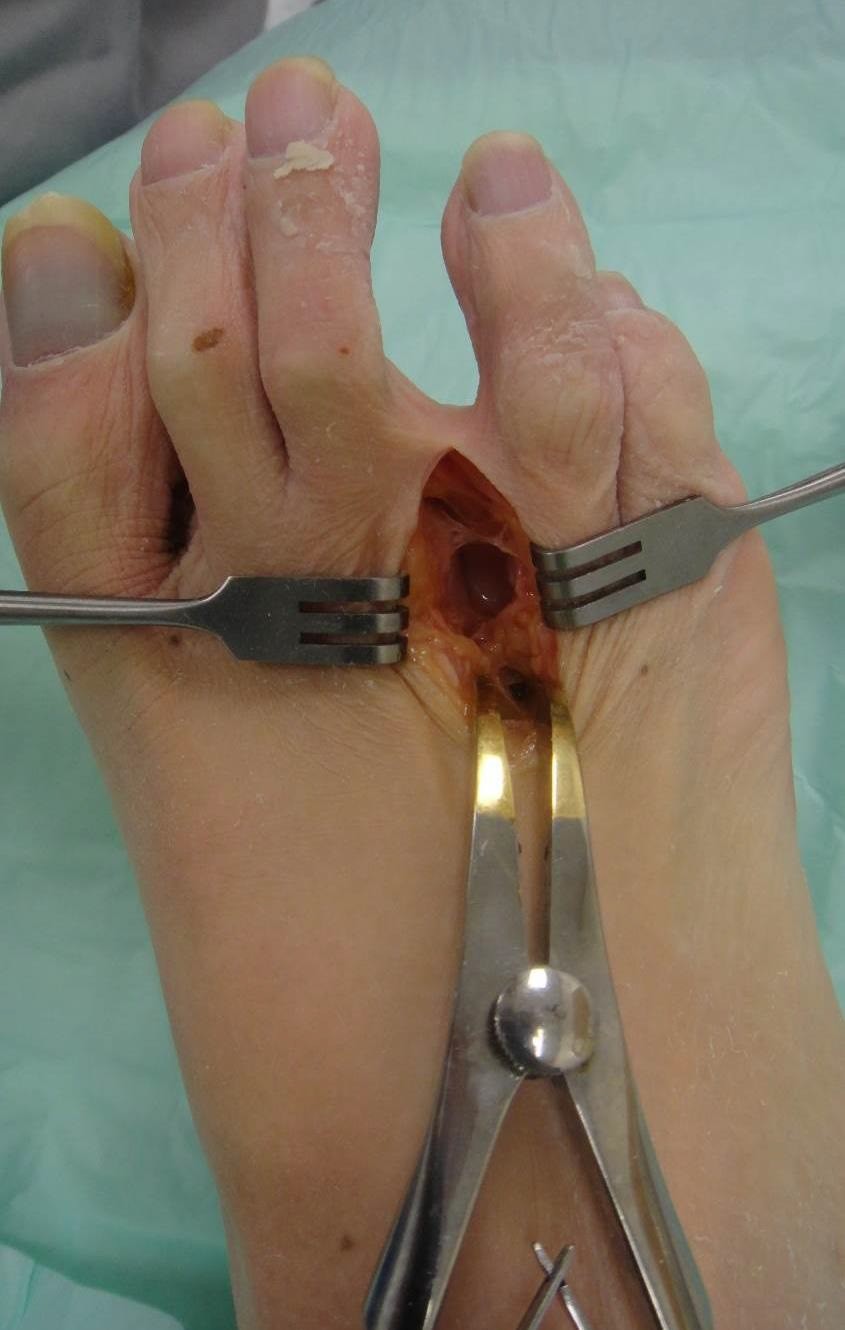 Each limb was then cyclically loaded between 667 N and 2669 N (150 lbf and 600 lbf) at 5 Hz. The upper limit, which is in the region of 4 times body weight, is a reasonable approximation to the experience of ankle joint loading during normal walking as established by Giddings et al.[19] Cyclic weight bearing of the limb was performed for 2 hours to simulate one week of ambulation. Subsequently, an AP radiograph was taken. The cyclic weight bearing was then continued for another 8 hours to reach a total of 10 hours or 180,000 cycles which is comparable to one month of ambulation. A final AP radiograph was then taken of the limb. 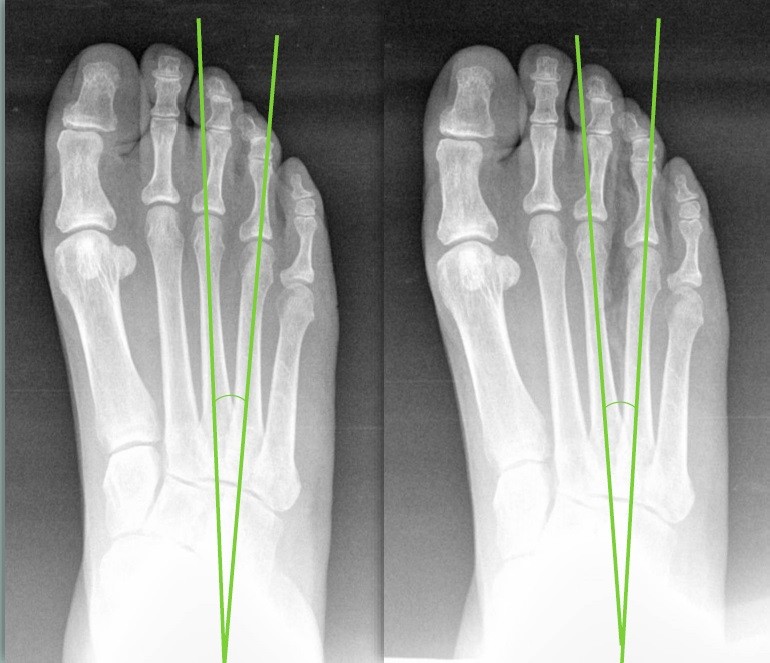 IMA 1-2, IMA 2-3, IMA 3-4, IMA 4-5, IMA 1-4, IMA 3-5, and IMA 2-5 at each time plot was statistically analyzed using a one way repeated measures ANOVA. Significance was defined as a p value of <0.05. Outcome of the study was based on a statistical analysis of the radiographic evaluation of IMA.

Nine out of the ten legs prepared were used for data collection. The limb excluded from the study was secondary to a severe rigid plantarflexion deformity of the ankle joint. Of the nine limbs used, one had an inadvertent lateral disarticulation at the ankle joint during the month cycling period of simulated weight bearing. As a result, the data were not able to be collected for this limb after one week of simulated weight bearing.

Regarding the IMA 1-4, data recorded at 1 week and also at 1 month cycling times showed statistical significance from pre-operative IMA 1-4 (p<0.05). The average increase in IMA 1-4 from pre-operative to 1 month cycling time was 1.79 degrees. The power of the analyses for IM 1-4 angles was 0.953. There was no statistically significant difference found in IMA 2-3, IMA 3-4, IMA 4-5, IMA 3-5, or IMA 2-5. The results for this study are summarized in the clustered column graph. (Figure 4) 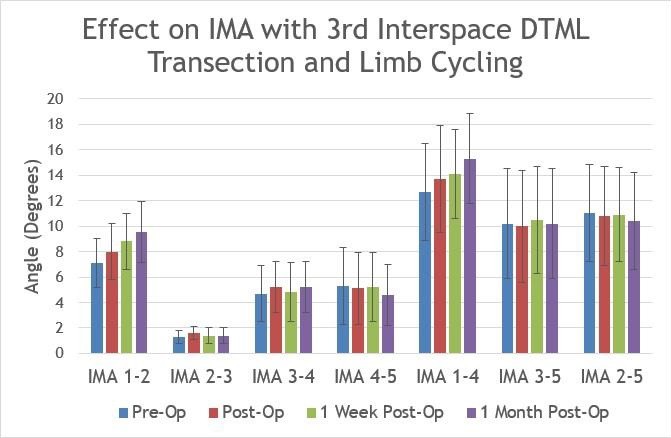 The purpose of this study was to evaluate the effect that the transection of the DTML at the 3rd interspace, as seen with a dorsal incisional approach for Morton’s neuroma, would have on metatarsal alignment. When the DTML was transected in the 3rd interspace, it was anticipated that the greatest change in IMA would be between metatarsals 3 and 4, with minimal effect on the adjacent intermetatarsal angles. Perhaps the most interesting and unanticipated data showed that there was a statistically significant difference in the IMA 1-2, which also extended to the IMA 1-4.

It would appear that the DTML acts on the metatarsal heads globally to maintain the stability and position of the entire metatarsal parabola as a single tethered unit. Because the 1st ray has the most available motion, it also is the most susceptible to abnormal transverse plane motion and instability from DTML transection at the 3rd interspace. As these results are cadaveric, it is suspected that clinically the intrinsic musculature of the foot would exaggerate this abnormal transverse plane motion of the 1st ray seen with DTML transection. Perhaps similar instability could be appreciated with transection of the DTML at any interspace. Further research is necessary to better understand the relationship between motion within the 1st ray and DTML transection.

Although these data demonstrated a statistically significant difference in the IMA 1-2 and IMA 1-4, none of the results showed a radiographically defined splayed foot (IMA 1-2 >12 degrees + IMA 4-5 >8 degrees)[11]. While 2.18 degrees increase in IMA 1-2 or 1.79 degrees increase in IM 1-4 would be considered an abnormal widening of the forefoot, clinically these values could not be detected nor should they deter a surgeon from performing a Morton’s neuroma excision via a dorsal incisional approach.

Several limitations are to be noted within this study. The primary limitation of this study was a small sample size. A larger study could have a more accurate portrayal of the results from a DTML transection. Also, cadaveric limbs used were not representative of all age groups, races, gender, and limb sizes. We were limited in the design of the cycling machine. Also, instead of the line of compressive forces traveling from the heel pad, down the lateral column, across the metatarsal heads, and through the hallux as experienced in the stance phase, the legs were cycled in such a way that there was an equal plantargrade compression force across the entire plantar aspect of the foot to represent the compressive force experienced only during the midstance phase of gait.

Future research on this topic could include transection of the DTML at other intermetatarsal spaces to see its effect on IMA and overall splaying of the forefoot. Also, research involving clinical trials of the measurement of IMA 1-2 following a dorsal incisional approach Morton’s neuroma excision might enhance and reinforce the data found within this study.

1. Morton, Thomas G. The Classic, A Peculiar and Painful Affection of the Fourth Metatarsophalangeal Articulation. Clinical Orthopedics and Related Research. 1979; 142.

21. Stamatis, E.D, Myerson, MS. Treatment of recurrence of symptoms after excision of interdigital neuroma. The British Journal of Bone and Joint Surgery. 2004;86:48 53